Whether you have crab traps for personal, recreational or commercial use, the state of Florida wants you to add a small device to your traps to help protect diamondback terrapins.

The devices are called Bycatch Reduction Devices (BRDs) and can be easily attached to crap traps (also called crap pots), providing an escape for the terrapins that sometimes become trapped inside. Terrapins must breathe air, so those that cannot escape the traps will drown. Crabs entering a trap with an installed BRD cannot escape.

The Marine Discovery Center is offering free BRDs to anyone desiring to add the devices to their crab traps. The hope is that mortality rates for diamondback terrapins will be lowered if BRDs are used, much as TED units (Turtle Excluder Devices) have helped lower deaths of sea turtles entangled in shrimp trawling nets.

“Crabbers place crab pots out in the lagoon and they use fish as their bait, which is the same food that diamondback terrapins would eat,” said Jessy Wayles, MDC Conservation Science Coordinator. “If terrapins are foraging for food and enter one of these crab pots to eat the bait, they’re not going to be able to get back out of the trap.”

Wayles noted that diamondback terrapin populations are already threatened due to habitat loss, boat strikes and accidental and intentional capture. 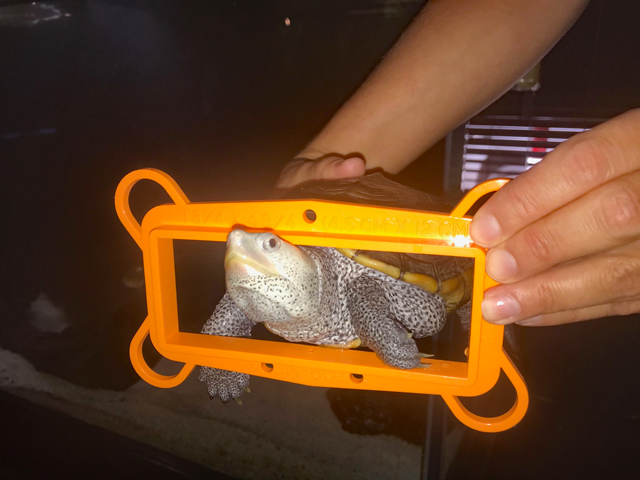 “There are two entrances on crab pots and we hope crabbers will install a BRD on each end to restrict the diamondback terrapins from going in,” Wayles added. “This won’t work for all diamondback terrapins — since they are different sizes, and juveniles might still be able to get into the crab pot — but at least the breeding-age adults won’t be able to get in if the BRDs are used.”

In an effort to better educate the public about this reptile species, the Marine Discovery Center has a diamondback terrapin on display in its exhibit tanks, as well as a terrestrial box turtle and gopher turtle in its educational classroom. MDC also plans to feature diamondback terrapins in its free monthly online lecture series, scheduled for Thursday, Aug. 19.

“People tend to see gopher tortoises, box turtles and sea turtles and love them, but they largely don’t know what a terrapin is because they are a very elusive species,” said Wayles. “The diamondback terrapin is the only brackish-water turtle species in the world.”

In fact, she added, there are seven subspecies of diamondback terrapin that reside along the Eastern Seaboard through the Florida peninsula to Texas. Florida is home to five of those subspecies.

Wayles noted that diamondback terrapins can tolerate higher-salinity waters, as well as zero-salinity water and fresh water, but are often found in brackish and salt-water bodies.

Even if the terrapins are out of the water sunning on dry land, the elusive creatures typically live near vegetation, to which they may quickly escape from perceived threats.

“They are very important to our ecosystem as both a predator and prey, but sadly, people in Florida don’t always know about them,” she added. “And they are often not aware that these terrapins can be better protected with the use of a simple device.”

For more information about getting BRDs for your crab traps, stop by the Marine Discovery Center at 520 Barracuda Boulevard in New Smyrna Beach or call the center at 386-428-4828.