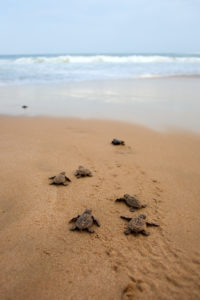 Loggerhead sea turtle emergence: the turtles emerge in a group and proceed to crawl down the beach to the water

Turtle-tracking volunteers and Canaveral National Seashore staff were busy during the 2017 nesting season with record-setting numbers of turtles finding the beaches of Volusia County.

Volusia County’s beaches experienced its second-highest nesting season since 1988 (when records were first kept) with 720 nests in 2017. Of the documented nests this year on Volusia County beaches, 634 nests were loggerhead sea turtles, while 82 were green sea turtles and four nests were the Kemp’s Ridley sea turtles – uncommon for this region.

Those numbers shattered records for both greens and Kemp Ridley turtles, and was the third-highest number on record for loggerhead nests on Volusia County beaches.

In Canaveral National Seashore, which spans both Apollo Beach (Volusia County) and Playalinda Beach (Brevard County), a total of 12,315 nests were recorded.

In Playalinda, rangers recorded 2,765 nests for loggerheads, 5,544 nests for green turtles and 16 leatherback nests. No Kemps Ridley nests were recorded on either beach in Canaveral National Seashore.

And while nesting season in Volusia County is typically in full swing from May 1 through October 31, nesting is not always exact – as there were still 15 nests incubating on the beach after Oct. 31.

As the 2017 numbers indicate, sea turtle conservation on the shorelines of Volusia County was viable and productive, once again.