The on-site Mosquito Lagoon Marine Enhancement Center (MEC), a partnership between the Florida Fish and Wildlife Conservation Commission and MDC, harvested its 20,000th plant from the donor marsh – a future possibility that seemed very far away back in 2014 when the restoration area looked more like a barren moonscape than an eventual plant nursery.

That new mark was set when Dr. Linda Walters and her team from the University of Central Florida (UCF) used the marsh to collect 100 plugs of Spartina alterniflora. The plants were harvested for use in living shoreline stabilization projects on public lands, including at Canaveral National Seashore, Tomoka State Park, Gamble Rogers State Park and Washington Oaks State Park.

Walters estimates she has harvested about 5,000 plants from the site to be used in conjunction with mangroves and oyster bags in her shoreline stabilization projects on Florida’s east coast.

“It is very important to me not to use plants from far-away locations, as I don’t believe that restoration activities should alter regional genetic diversity,” Walters said.

“Having a local donor source also keeps the project costs down,” she added. “I had not heard of donor marshes until the MDC marsh was created by all the partners, so we heartily thank them for the foresight in helping with community restoration in Florida.” 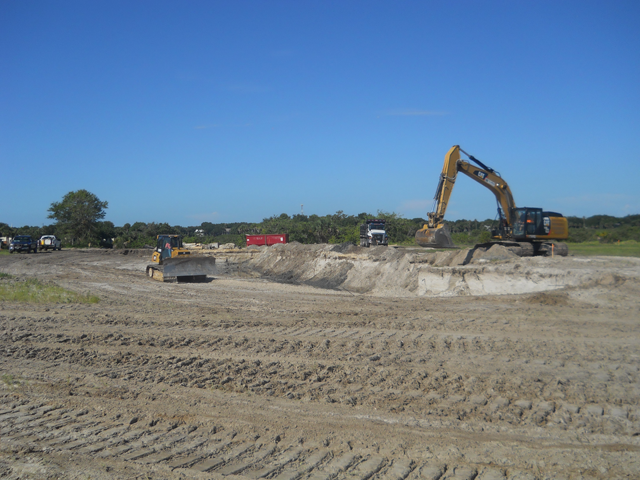 That initiative began in 2014, when more than 45,000 cubic yards of fill material was moved from the 22-acre site that housed New Smyrna Beach High School from 1963-2006. The site was graded to restore original tidal-marsh elevation alongside the backwaters of the Indian River Lagoon, creating a salt-marsh habitat, as well as an appropriate upland slope for native plants.

The project was widely embraced by New Smyrna Beach residents and surrounding academic communities from the start, with volunteers pitching in during the summer of 2014 to hand-plant more than 25,000 native plants. Several planting sessions were held during the sweltering summer months with volunteers crawling, sitting, kneeling and digging in mud — and eventually, wading into the emerging salt marsh to address aquatic plant needs. 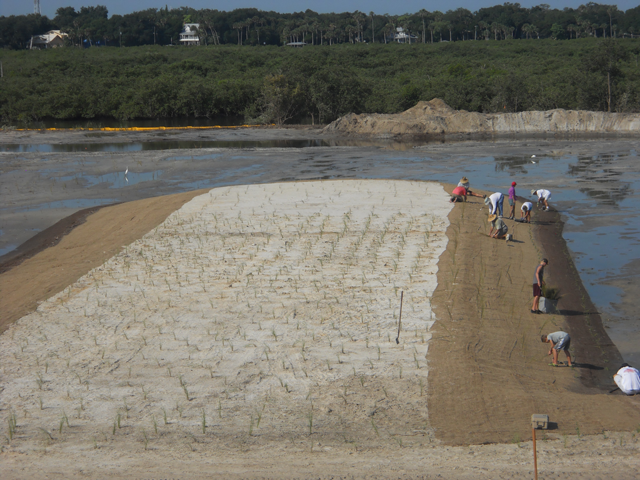 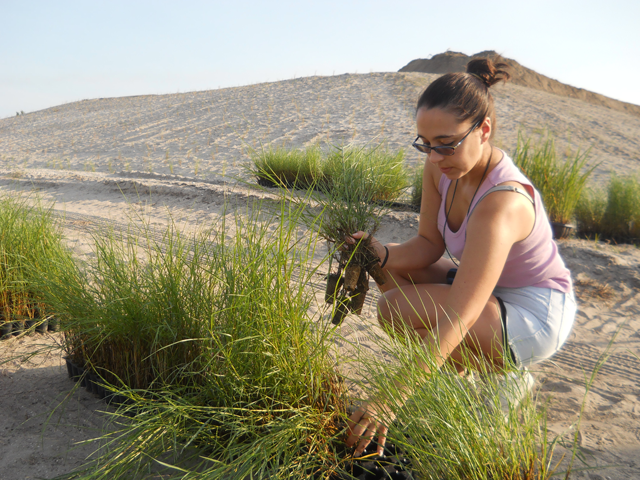 In addition to bringing the stark restored landscape to life with native plants, volunteers helped plant the site’s living shoreline demonstration area. That section of the restored salt marsh provides sample shoreline stabilization techniques, such as a terraced slope, as well as educational signage with information about utilizing plants, oyster shell and coquina rock to create a stable, healthy shoreline without hard-armored seawalls.

“It’s been amazing the see the change over time,” said Annie Roddenberry, a biological scientist with FWC’s Aquatic Habitat Conservation and Restoration division. “Nearly seven years later, it’s almost impossible to imagine that it ever looked like a moonscape out there. There’s incredible diversity of plants, birds, fish, crabs and it has filled in with three species of mangroves, Spartina mid-marsh and high-marsh species. We wanted to make sure this site has room to grow with sea-level rise and climate change.”

The project’s original permit required the marsh to be monitored at least twice a year for five years. Nets were utilized to monitor fish communities and gridded plots were implemented to monitor plant communities. Volunteers and staff from the Marine Discovery Center and students and faculty from the University of Central Florida pitched in to assist, providing much of the labor, as well as biodiversity monitoring along the marsh’s shoreline. Citizen scientists from MDC relished each opportunity to observe the captured species and learn what was living in the marsh.

“Every single time we went out and monitored fish communities, we would see a species that we hadn’t yet seen,” Roddenberry said. “It was rewarding to see that community change as the plants filled in. We caught about 48 species in our seine nets after only four years.”

Annie is pictured here (L) with Tess Sailor-Tynes of MDC and Jeff Beal of FWC. 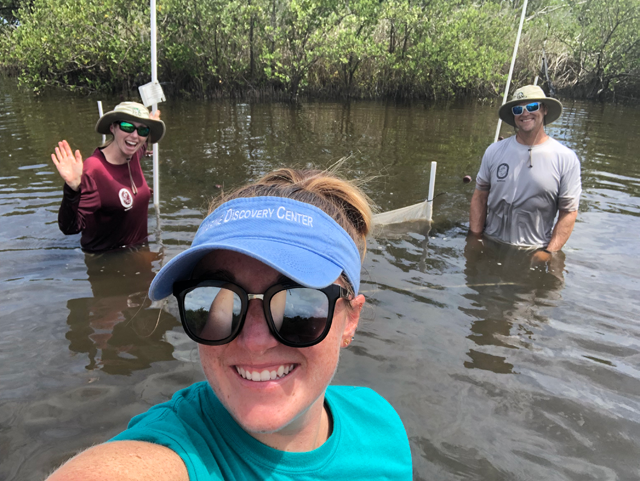 One of the things FWC scientists working with the project observed was a mix of marsh transient species and marsh resident species. Just passing through, the transients use the marsh to feed or lay eggs. The residents – such as killifish or gobies – spend their entire lifespan in the marsh, breeding and foraging.

Several imperiled species, such as the Atlantic saltmarsh snake, Eastern diamondback terrapins and even Spartina-munching manatees, have also spent time in the restored marsh. Various conchs, crabs and horseshoe crabs have made visits.

Even a plethora of birds have touched down in the marsh, including visiting tri-colored herons, reddish egrets, countless wading birds, shorebirds and raptors. An entire colony of elusive clapper rails now call the marsh home and can be heard chattering in stereo deep from the foliage.

In fact, wading birds were among the first species to “discover” the restored marsh. When construction workers breached the perimeter during the summer of 2014, allowing the outside tidal waters to flow into the marsh late one afternoon, less than 24 hours later – with the marsh now filled with water – multiple species of egrets, herons and ibis dropped in to forage and explore.

“It’s true that if you build it, they will come,” Roddenberry said. “These animals have found the site and they’re using it for habitat. That’s always the goal.”

In addition to traditional biological monitoring, the U.S. Geological Survey implemented mechanisms to monitor the marsh’s long-term elevation changes. Three sediment elevation tables were placed in the restored marsh, while three others were installed in nearby natural marshes as a reference to monitor soil erosion and accretion.

“That’s the beauty of working with global partners in these projects,” observed Roddenberry. “We can put our understanding into a bigger context and compare what is happening in our marsh to those around the world.”

Only two years into restoration, the marsh weathered its first big test in 2016 with Hurricane Matthew, and again in 2017 with Hurricane Irma. Central Florida experienced direct impact with winds in excess of 90 mph during those two storms. Hurricane Irma hit the area at high tide with heavy rainfall, flooding the marsh above many of the structures in the living shoreline demonstration area.

Fortunately, when the water receded, the shoreline and marsh had suffered very little damage other than a tiny escarpment near the demonstration area where vegetation had not yet filled in. The plants and shoreline had done their job — literally weathering the storms.

“These living shorelines hold up very well to storms,” said Roddenberry. “You never want hurricanes, but when they come, they test your work and how these systems hold up. We’ve found that once the plants settle in and find their place, they provide excellent shoreline protection.”

Another gradual test the restored marsh has endured has been its transition as a salt marsh to a burgeoning mangrove forest. After only three years, red, black and white mangrove tree propagules had nestled into the marsh and were now producing trees. Within six years, there were already mangrove trees well in excess of five feet in height.

Rather than fighting the natural ecological succession in the marsh, scientists managing the project embraced the change and used it as an opportunity to address the overall changing environment. And while mangroves have outcompeted much of the original planted Spartina, the marsh has also become a donor of mangrove propagules for shoreline restoration efforts by UCF, Bethune-Cookman University and the Brevard Zoo. 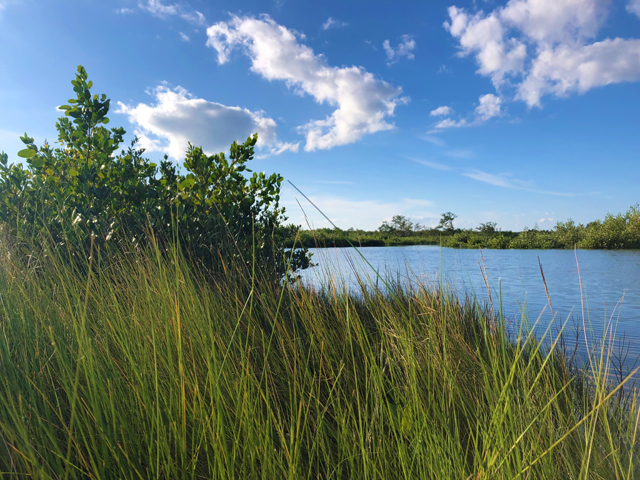 “This is such a good opportunity to talk to people about climate change, sea-level rise and some of the natural shifts we’re starting to see, especially in this area of Florida where we are in a transition zone,” Roddenberry added. “We have mixed communities of mangroves and Spartina and we’re maintaining that composition of multiple habitats – a mosaic that we really like to have. We know we’ll have more mangroves moving in.”

The restored marsh has attracted many guests to the Marine Discovery Center over the years and has helped educate the public with its informative on-site signage. Signs provide information about the value of living shorelines and local citizens have visited the site for ideas about how to renovate their own waterfront properties.

MDC launches its kayak eco-tours in the marsh and teaches guests about the many services of a marsh within the ecosystem. The environmental center also hosts the University of Florida’s Florida Master Naturalist Program classes twice a year and the marsh often is a focal point in class discussions.

“It’s been a rewarding project to see the results of our vision become reality,” said Chad Truxall, MDC’s Executive Director. “The restored salt marsh meets the major actions of our mission: Education, Conservation and Exploration.” 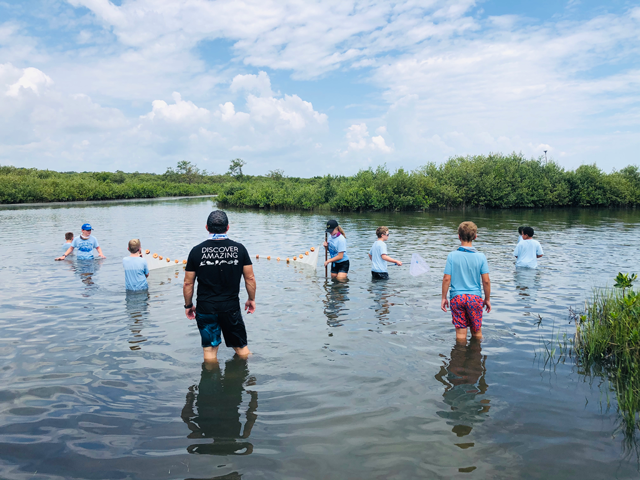 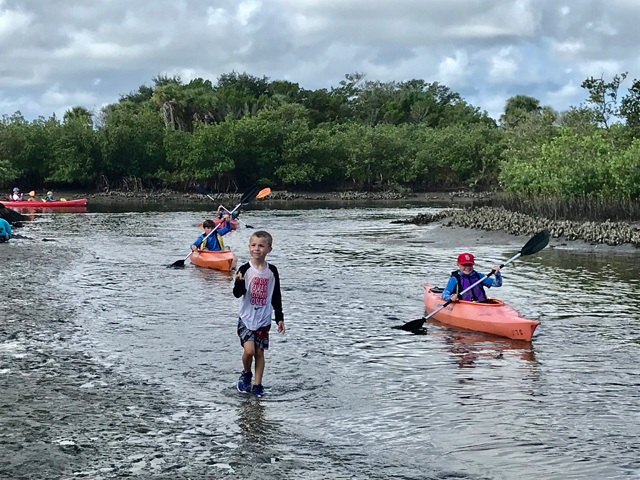 “In education, we teach the community about the importance of coastal habitat and living shorelines,” Truxall added. “Through conservation, we harvest plants and use them to help restore coastal habitat throughout our region, and with exploration, we’re able to explore the marsh through our hands-on, feet-wet educational programs.”

The restored marsh has also become a desirable observation site by local birders and Audubon chapters, with MDC hosting regular weekly birding walks at the marsh during the winter months. MDC guests often appreciate the chatter by the hidden clapper rails living in the mangroves.

Students and faculty from surrounding universities – including UCF, Bethune-Cookman University, Stetson University, Embry-Riddle Aeronautical University and Daytona State College – also have conducted independent research projects in the marsh, ranging from oyster recruitment, fiddler crab and bird communities, to above- and below-ground biomass of plants. The marsh has served as a living laboratory for both undergraduate and graduate students.

“Hundreds of students have had field experiences in my classes and labs to combine learning about marsh ecosystems with collecting Spartina shoots,” said UCF’s Dr. Walters. “A combination like this is called service-learning, [which enables students to] learn course content while helping the community.”

As one of the state’s marine enhancement centers, Roddenberry notes that future plans for the entire 22-acre site may potentially include space for an FWC fish stock enhancement facility, seagrass nursery, law enforcement office, a hub for restoration projects and educational space. But certainly, the site’s continuous focus will be to serve as a reliable donor source for plants and mangrove propagules. 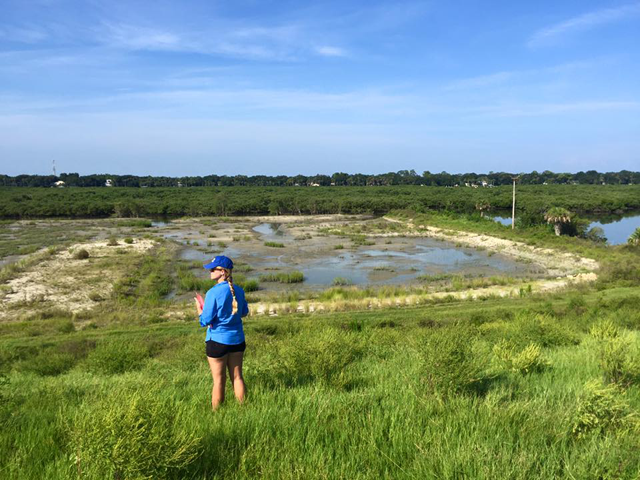 “We have built a community of ambassadors who have helped plant the plants, catch the fish and watch the marsh grow with their own eyes,” Roddenberry added. “This place has a lot of meaning for them and they want to talk about it and bring others here.”

“There is value in that because it has become the community’s marsh,” she said. “They have watched this place absolutely flourish and we just keep learning and harvesting. It really is a project that keeps giving back to the community.” 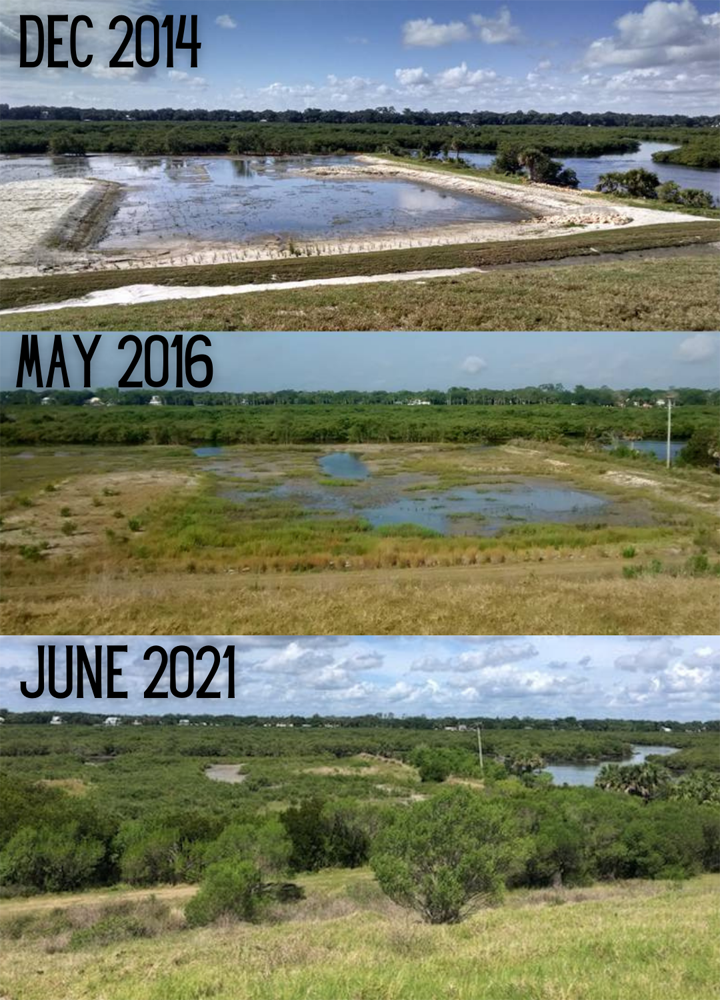