MDC volunteer Bill Arndt can do anything. Need someone to help maintain the grounds at the Marine Discovery Center? Give him a weed whacker. Need someone to monitor horseshoe crabs, or work in the oyster program, or back a trailer full of kayaks down to the water? Just ask Bill for help.

A retired civil engineer who spent his career managing heavy, highway and marine contracts and racing his sailboat, Bill can seemingly handle any task, regarding each challenge with his usual sense of adventure, shy smile and sparkling blue eyes. You might even see him blowing by you on his scooter en route to the Marine Discovery Center and his next adventure.

Q: Where did you grow up? A: I grew up in Reading, Pa. From there I went to Drexel University and earned a bachelor of science degree in civil engineering. My father was a contractor, so even when I was 16 years old, I worked with him building bridges and highways. That’s where I learned to build things. 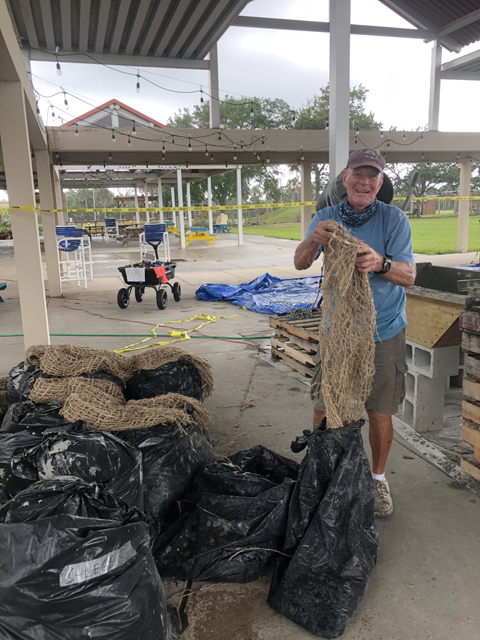 Q: What did you build in your career?
A: After I earned my degree, I got hired and went to work on the Saint Lawrence Seaway in construction work and I remained in that field throughout my career. I did a lot of heavy construction, including building cofferdams, a lot of offshore work, tunnels, deep shafts, bridge and highway work, mining and practically anything with heavy construction. I went to Puerto Rico in 1960 and assisted in building [the world’s second-largest single-dish radio telescope], the Arecibo Observatory, and then I returned to work all around New York state before settling in Albany, N.Y., where my wife, Maggie and I raised our family.

Q: When did you retire? A: I retired when I was 60 years old because it was getting pretty tough in the contracting business. I worked mostly outdoors. I had to go into the office to do the bidding for jobs sometimes, but I was the low bidder really badly. We took a few baths. We went broke twice, but we managed to pay everybody off. Our volume was about $20 million a year back in the 1980s. I was a partner with a group in Albany, so I decided to sell out my share of the business.

Q: What came next? A: I wanted to do some sailing somewhere other than in the lakes in New York state. We moved down to Oriental, N.C., the sailing capital of North Carolina, that has about 800 residents and 3,000 sailboats. I spent 20 years in club racing and cruising the Chesapeake Bay, down the Atlantic Intracoastal Waterway and throughout the Pamlico Sound. I sailed to Charleston, S.C., and to Florida a few times. My last sailboat was a 36-footer and it was a racer-cruising boat. We didn’t live on the boat, but we vacationed on it.

Q: How much did you enjoy racing your boat? A: When I raced, it was just my lifeblood! If you don’t race, you don’t know how to sail. And that teaches you how to cruise.

Q. How different was it to go from the lakes of Upstate New York to racing in the Southeast? A: Primarily, we were in the Pamlico Sound [off the coast of North Carolina] and I was also offshore. But it’s very different than the lakes because the wind is quite shifty and you’re always adjusting in the lakes. Down on the sound and in the ocean, the wind is fairly steady in its direction.

Q: How long did you live the sailing life? A: I started sailing in 1973 and we sailed until 2014. We decided that we’d had enough of it and sold the boat and moved to New Smyrna Beach in 2014. Our daughter and son-in-law had purchased a house near Canaveral National Seashore, so I went down and helped them reconstruct the beach house. We liked the area, decided to move here and bought a condo.

Q: That was probably a big adjustment — a big downsize, right? A: Quite a bit. One of my hobbies was woodworking when we lived in North Carolina. I built furniture, clocks and cabinetry. I had a lathe, a 10-inch table saw, a band saw, a 15-inch planer, routers and you name it, but I sold all of my tools when we moved. It was a big change and when I first came here, I thought, “What in the world am I going to do with myself?” My wife was also getting antsy because I wasn’t doing anything. Then I saw something listed about the Florida Master Naturalist Program Coastal course being offered at MDC, so I enrolled. After the class, they were looking for volunteers. I thought it would be interesting to volunteer here, so I started in spring 2017 after the class.

Q: In which areas have you volunteered at MDC? A: I’ve worked as a sweep in the kayak program. I also help out with S.W.A.T. [Site Work Action Team] on the grounds at MDC once a month. I’ve also participated in the microplastic surveys, water analysis on a weekly basis, horseshoe crab surveys and I’ve helped with the oyster program. I’m over at MDC an average of two days a week. I also close the gate at Indian River Lagoon Preserve Park on Sundays and Mondays.

Q: Any desire to get another sailboat?
A: No, I’m 84 years old. I’m too old to be jumping around a sailboat!

Q: Where else do you volunteer?
A: I also volunteer at Canaveral National Seashore. I work with a group of men called the “Tuesday Group” and we build picnic tables and clean up the camp sites out on the water. We’ve also repainted all the signs. Any projects they have, we volunteer to get it done.

Q: What do you enjoy about volunteering?
A: Just the satisfaction of accomplishing something and enjoying the company of other people. You also learn a lot. 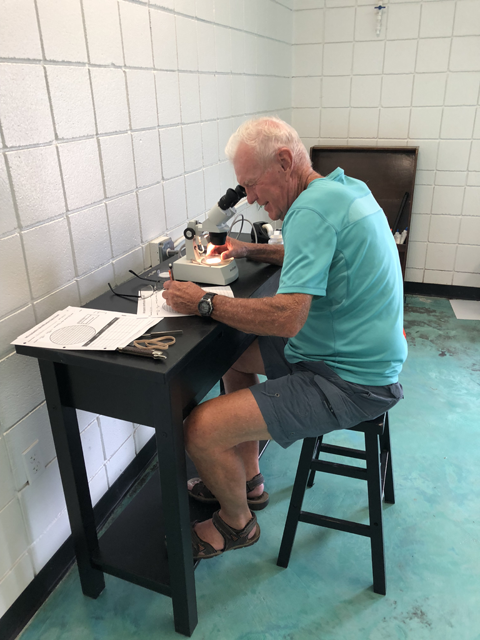 When I was working, I didn’t have time to volunteer. We worked six days a week, and in the Northeast, you have to work long hours in the summertime. We still worked in the winter, but it’s brutal work during those months.

Q: How do you mix cement during the freezing winter months? A: The cement is heated and we put calcium chloride in it. You have to keep heat on it while it cures. We worked on the New York State lock [canal] system and that has to be done in the winter time.

Q: You are a lifetime builder of things. Can you do some of that with your volunteer work? A: A little. I do more building at the national seashore. I probably help with a few short cuts here and there, making things easier for people.

Q: Is volunteering now your hobby? A: This is primarily my hobby. I also have a wildflower garden at our condo and everybody is enjoying it. I found a little spot that’s maybe 30 by 20 feet, but it has all of our native wildflowers in it. We’re trying to attract the Monarchs, but we have several other butterfly species, including the Gulf Fritillaries and the Great Southern White. Even the Zebra Longwings have come in. I have a tough time growing parsley there and that’s what the [Palamedes] Swallowtails like.

Q: How have you seen MDC change since you started volunteering? A: MDC seems to have grown exponentially since I first came here. The amphitheater and new kayak storage building have been added and I think there are more classes here now. I feel like this is going to grow a great deal more.

Q: What do you like most about helping MDC in our community? A: It’s just a lot of satisfaction that I’m trying to help improve the environment. Our environment certainly needs a great deal of improvement.

Q: Have you learned anything about yourself while volunteering at MDC? A: I’ve been outdoors all of my life. I have to be outdoors and I’m still doing that as a volunteer.

Q: What has been the highlight for you at MDC? A: Probably once when I was out on a horseshoe crab survey with Rebecca [Moscatello, a fellow MDC volunteer]. We had looked for days and days for horseshoe crabs and there was nothing, and then on one day, when the wind and tide were just right, we had horseshoe crabs coming from everywhere. They never stopped coming! There were so many that we ran out of time tagging them. I had never seen so many of these animals at the same time. One group would go out and another group would come in. The two of us were working together and it was quite a day.