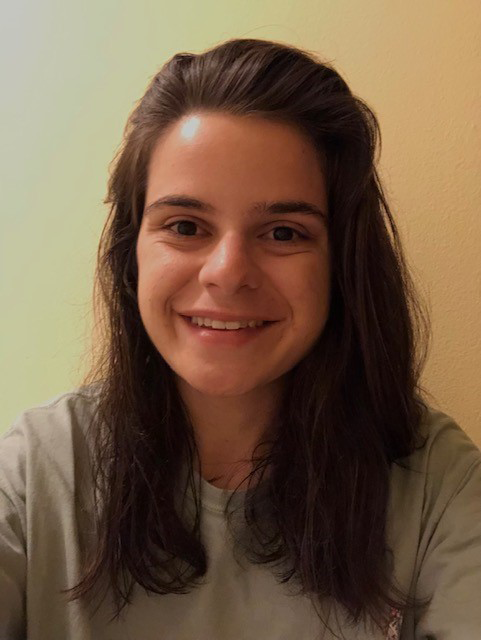 Courtney Schultz was an enthralled young summer camper at the Marine Discovery Center as a child. Summer after summer, she came to camp and participated in all of the on-the-water activities MDC camp kids get to experience.

Now 28, Schultz lives in St. Augustine and works as an aquarist at Guana Tolomato Matanzas National Estuarine Research Reserve (GTMNERR). In her words, she has come full circle — seeing a horseshoe crab for the first time as a youngster at the Marine Discovery Center, and now, as an aquarist, caring for horseshoe crabs in the aquariums where she is employed.

Q: Where did you grow up?
A: I grew up in West Palm Beach, but I went to summer camp at MDC in New Smyrna Beach because I stayed there with my grandma in the summer. She is the one who enrolled me in the Marine Discovery Center’s summer camps and a couple of Jimmy Lane Surf Camps, as well.

Q: How many times did you attend MDC summer camp?
A: At least for four years. I kept coming back. My grandma would always ask me if I wanted to go back and I’d always say, “Definitely!” Going to those two camps were the main things I did every summer when I stayed with my grandma.

Q: How did your experience at MDC’s summer camp impact you?
A: It cemented my passion for marine life. I’ve always had a love for it, but going to MDC actually taught me the biological and ecological aspects of marine life. Very few 8- and 9-year-olds are learning about ecological niche roles of the different organisms in the lagoon. It gave me a solid foundation in marine science.

Q: Talk about your educational path.
A: I graduated from A.W. Dreyfoos School of the Arts in West Palm Beach in 2012, as a theater and digital-theater major. I was decent at acting and I had to audition to get in, but the only reason I went to Dreyfoos was because it was the only school in Palm Beach County that had a marine science course.

In middle school, going into high school, I decided that I wanted to study marine science in college. That’s why I started collecting fish and invertebrate guides and other resources. After high school, I went to the University of South Florida in Tampa and got a bachelor of science degree in biology with a concentration in marine science in 2016.

Q: How about any other training?
A: MDC got me started in snorkeling growing up, so I got obsessed and learned how to scuba dive later. I got my certification in SCUBA in 2009, while I was still in high school. I have spoken to other scientists at marine centers and they all say that scuba diving is crucial for any work you want to do involving marine life. I currently have nine different SCUBA certifications, ranging from research diving, night diving, cave diving to underwater-photography diving.

Q: Where was your first job?
A: My first job in the field was at the St. Augustine Aquarium. I was a marine biologist there from 2017 to August 2019. I prepared the daily diets for the animals and assisted in the maintenance and upkeep of life support systems for the aquariums. I got to work with stingrays and nurse sharks.

Q: What came next?
A: I left there in 2019, and went a few miles up the road to work as an OPS park ranger and aquarist at Guana Tolomato Matanzas National Estuarine Research Reserve (GTMNERR). Now, I’m taking care of 14 different aquariums ranging from freshwater to 30 ppt [saltwater]. I’m maintaining a 125-gallon-per-day RO/DI unit [Reverse Osmosis Deionized Water system used to remove impurities from water], changing out the filter cartridges and making sure the water is right. I also combine salt and mix it to the desired salinity for the tanks here. We conduct up to 15 water changes weekly. In addition, I treat animals, such as fish, terrapin, invertebrates and snakes, for bacterial and fungal infections.

Q: There is a tank in the front lobby at GTM with some lively diamondback terrapins!
A: Yes, we have two males in the front tank right now who are good pals. I used to have a female in that tank, but the female was a such a spectacular fish hunter that she was eating many of my fish and becoming obese. I had to take her out of that system and put her in a system where she couldn’t feed on anything. We have six diamondback terrapins with three different sub-species. 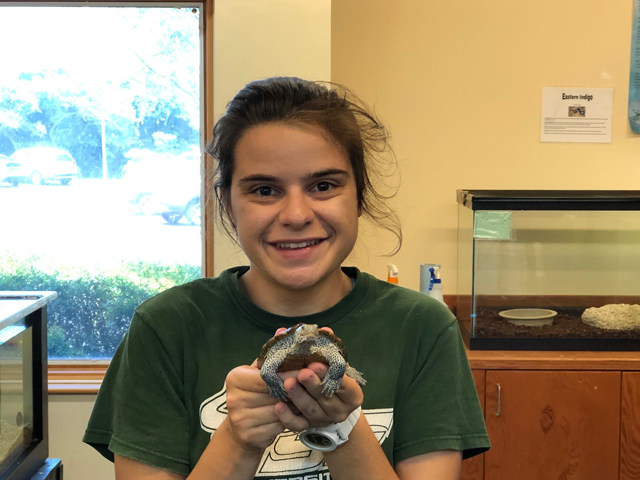 I have to cast-net for live shrimp now just for extra treats for our terrapins. I learned how to do that at MDC, and now, I’m using that in my job! Of course, I quarantine those live shrimp for a week just in case they are out in the wild eating things with bacteria. That way, I can safely feed them to our terrapins without worrying that our terrapins are going to get some weird bacterial infection that I’m going to have to treat.

Q: Are you learning some new skills on a boat?
A: I’m familiar with boats, but I have to get certified with the Department of Environmental Protection in order to operate the boats at GTM. I already have my DEP kayak and canoe certification.

Q: Isn’t diving a big interest of yours?
A: For sure and I dive offshore as often as possible. Shore diving works just as well. You can drift-dive on the shore and see quite a bit, but certainly nothing beats a rocky-reef ledge with a fair number of grunts [fish] out there.

Q: How did your appreciation for marine life begin?
A: MDC was absolutely crucial in starting my curiosity and interest in marine life. I remember how we did dock scrapings – removing different species from the boat dock, which were used at the center. We would find tunicates and squirt them at each other. The summer camp made learning fun and unknowingly educational for me. That experience sent me on this stellar, really salty path in life! 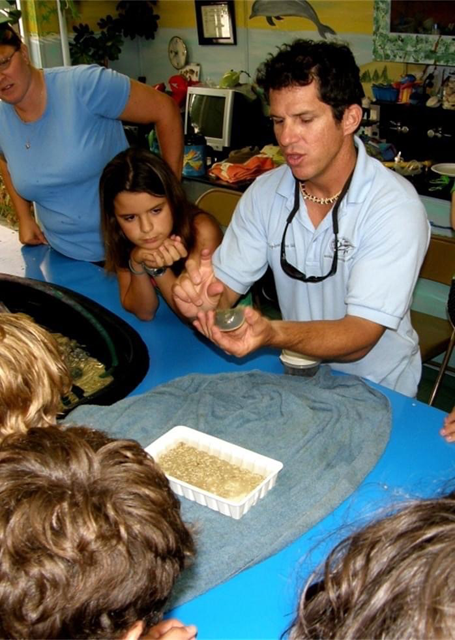 Q: Can you recall any specific moments at MDC summer camp that made you want to learn more about science?
A: For sure, the sea squirts we found on the boat dock were so interesting, but I also remember using the seine net when we went out on the Discovery boat. We would bring up what we found in that net and sort them as vertebrates and invertebrates. That was one of my favorite things. I just remember finding things and asking Chad if they were the right size for the animals to eat in the MDC tanks?

Q: How is MDC’s summer camp different from other camps?
A: I did similar things at other camps, but they didn’t have the resources that MDC has. The aquariums and pontoon boat were something that made MDC pretty unique. MDC can take children out on the water to learn and whenever we went out on that boat, I knew we were going to find something interesting.

Q: Now that you are working in a nature center with children, what do you hope to teach or share with others about the ecosystem?
A: The importance of marsh grasses and how it impacts erosion along shorelines. I try to teach them how to respect and protect those grasses, especially now that we are in hurricane season. Any sort of wake along a shoreline that is lacking grasses can be actively eroded. In addition to the shoreline erosion, the animals that live there are also impacted because the grasses are needed for food and shelter.

Q: Do you now work with volunteers?
A: Volunteer assistance is so important at a research/educational facility. GTM, just like MDC, relies on volunteers in every department to complete various tasks. I have five volunteers who help me with almost all of my water changes and in caring for the aquariums. Five other volunteers assist with archeology monitoring, such as active shoreline erosions, oyster mats or different types of mitigation to hold our shorelines together and provide a place for the mangrove seeds [propagules] to grow. Two of my volunteers specifically help me turn eight hours of work I would have to do alone into six hours of work with their help. I truly appreciate the dedication, hard work and enthusiasm shown by the volunteers who work with me.

Q: What do you want to show young girls about STEM careers?
A: The potential, especially if they have a curiosity about something. Any STEM field fuels curiosity, and that’s important, especially if you are a female going into a field like engineering that is still mainly a male-dominated field. You just have to let your curiosity lead you and drive you, especially through a university setting and on to a career.

Q: Do you feel like what you are doing now as a career has meaning?
A: I will never miss a day of work! I care for 14 aquariums and so many animals, including seven snakes. I am the only person who changes their water and the only person who feeds them, so for my position, what I do matters. I try to get the terrapins outside for sunlight. So, my position as an aquarist is all about the animals. They are the ones who are relying on me. 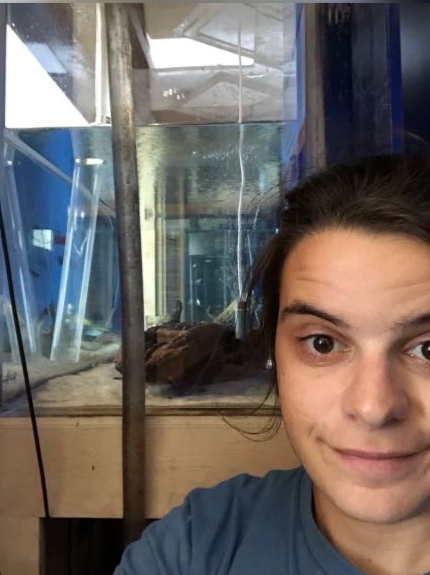 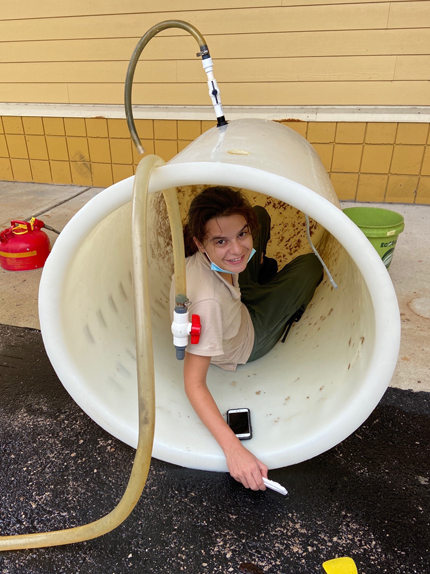 Q: Does what you are now doing for a living feel like an extension of MDC summer camp?
and lick the back of the mangrove leaf when I talk about salt, I definitely think of MDC! I’m even friends with [MDC Executive Director] Chad [Truxall] on Facebook, so I’m always sending him pictures of the terrapins or some sort of outing that I did. We’re still close, even after all of these years.

Q: What’s your dream job?
A: I’d like to be a water-quality technician. The past five to eight years have been about me wanting to educate and give back because I’ve had so many amazing influences, like MDC, that encouraged and taught me as I went down this path. Now, I want to start moving into water-quality sampling and analysis as a future career path.

Q: Water quality is an issue everywhere, especially in the Indian River Lagoon. How important do you think this issue will be in the future?
A: It’s a resource that some may fight over. You can go longer without food than without water. It’s pretty important, especially in Florida. Our aquifer system is extensive, but the health of our aquifers is really going to be a battle that will be waged during our lifetime.

Q: What do you think kids are getting out of today’s summer camps at MDC? Is it about more than just going to camp?
A: It lays the foundation for any STEM fields that may interest any one of them. It’s a foundation truly created out of concrete. It might be that easy-mix concrete, but it still lays a rock-hard foundation. MDC has been so instrumental in building that foundation and getting me to where I am today.