MaryAnne West is that happy-faced volunteer you might find baiting hooks for kids in summer fishing camps or encouraging youngsters on the 203 stairsteps winding up the Ponce Inlet Lighthouse during camp and education outings. 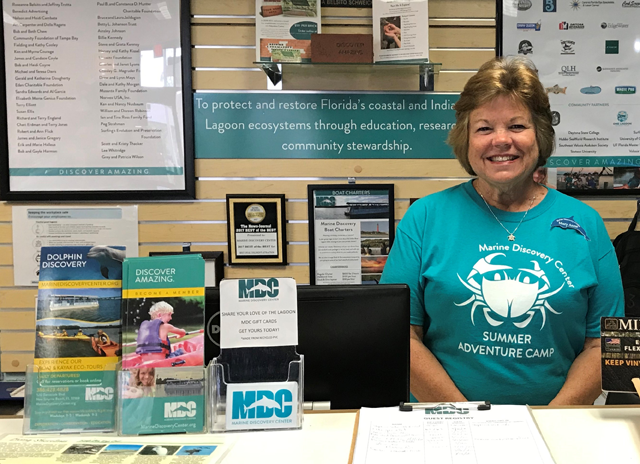 You might even see her working at the Welcome Desk each Thursday morning, helping guests find perfect activities during their visit to New Smyrna Beach. She also happens to be the mother of Marine Discovery Center Education Coordinator Michelle West, who enjoys having her mom assist with the younger age groups.

Q: Where did you grow up?  A: I grew up in Macon, Ga., and lived there all my life until I went away to college at Georgia Southern University in Statesboro, Ga. I got a degree in education and also social work.

Q: What kind of work did you do in your career?  A: My first job was in Daytona Beach. My husband, Dwight West, went to Embry-Riddle [Aeronautical University]. We got married in 1974 and I worked for the Rehabilitation Center for the Blind in Daytona Beach. At that time, I was mostly teaching keyboarding, typing, communications skills and Braille. These were mostly adults, from age 16 to 65. It was the state rehab center for the blind where people who had become visually impaired or blind came to learn skills to get back into the work force. I worked there for 2 ½ years and then we moved away for my husband to go through pilot training. I actually returned to the same job 25 years later, worked there for 18 years and retired from the state of Florida. It was both the very first job and very last job I had, with 25 years in between. I retired in May 2014.

Q: What did you do during those “between” years?  A: I mostly worked as a teacher in elementary schools. I taught kindergarten through second grade in Duluth, Ga., just north of Atlanta. I went from teaching blind adults in small classroom sizes to 16-25 young children in a single classroom. I really missed the one-on-one instruction. I taught there for about 10 years. We also owned a business for a while at Lake Lanier outside Atlanta. We owned a store called Spinnakers on Lake Lanier and we sold water recreation items for the lake, including floats, skis, vests and sunscreen products. We ran that business for three years as West Wind Enterprises until Dwight was hired by Piedmont Airlines. When she was 5 years old, Michelle would sit on a stool and run the cash register.

Q: How much moving did you have to do with Dwight’s job as a pilot?  A: He started out with Piedmont Airlines, then went to United Airlines. He was based in Charlotte, N.C. We had bought a lot at Lake Norman outside Charlotte, but his base kept changing. He was transferred to Pittsburgh and to Philadelphia. Michelle was in school at the time, so we tried to just stay put in the Atlanta area. We did move to Philadelphia for two years, but it wasn’t for us and that’s when we moved to New Smyrna Beach in 1999. At that point, Dwight flew out of Orlando for American Airlines. He flew international flights, which was fun for us because we got to see a lot of the world through his job.

Q: Is travel a hobby?  A: We have travel benefits, so we travel a lot. We normally take two trips each year. I enjoy photography and scrap-booking and put together things after many of our trips. I feel fortunate that I have seen 40 of the U.S. states and we’ve traveled to 46 countries throughout the world. Dwight is retired now as a pilot, but he has been to 85 countries. As long as there are empty seats on a plane, we can travel to any place in the world. We can also get reduced rates on boat cruises. Dwight flew C-130s in the U.S. Air Force and was in the Air National Guard for almost 30 years, so we also take group trips with a lot of the pilots and their wives throughout the world.

Q: When did you first become active at MDC?  A: Michelle was already working at MDC when I retired from teaching in May 2014, so I started volunteering. The first thing I did was help Mr. Ron [McKay] with fishing at summer camp. I like to fish, so it was a lot of fun. Then I took the Florida Master Naturalist Program’s Coastal class that fall and that’s when I started volunteering in the Welcome Center. I’ve worked at MDC’s Welcome Center since fall 2014.

Q: So, you work at the Welcome Desk, with summer camps and also with education? A: Yes. I work a lot of holiday camps because that’s when education has fewer volunteers. Two years ago, I worked five of the 10 weeks of summer camp – mostly with the younger campers because more volunteers work with the older kids. I climbed the Ponce Inlet Lighthouse five times one summer during camp, but I enjoyed that. I like working with the younger kids and seeing their enthusiasm when they get excited about nature. At a recent camp, they went on boating adventures, saw sea turtles and went on hikes. They never even talked about electronics while they were at camp.

Q: That 4-9 age group is pretty special, isn’t it?  A: They can get a little wild sometimes, but they have such enthusiasm for learning about new things and learning how to treasure the Indian River Lagoon. Hopefully, that will stay with them when they are adults.

Q: How different is it working at MDC with kids in camps versus kids in a school classroom setting?

A: It’s similar, but I think they are more excited here because it’s something they get to choose to come to rather than just the day-to-day classroom instruction at school. They’re not just sitting at a desk in a classroom. 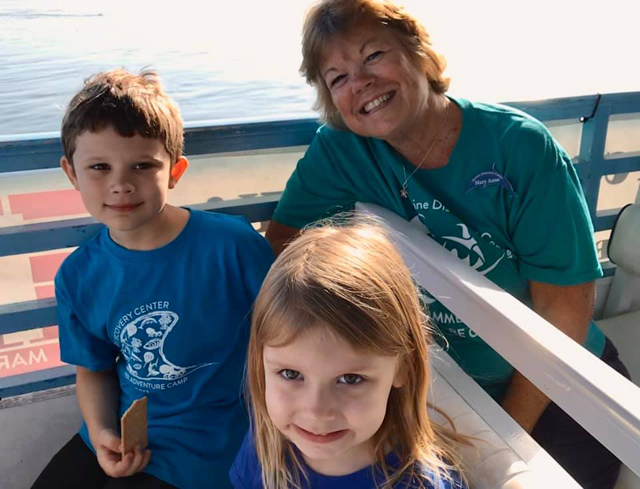 The other day at MDC camp, we had a dance party on top of the observation mound. Michelle had music on her phone and the kids were dancing all around and having fun. They are excited about being here and they are still definitely learning.

Q: As a retired educator, how do you think you’ve been able to help Michelle at MDC, and is there something you have learned here?  A: Michelle is a really great educator, especially in how she relates to the kids. She and I can definitely relate to each other, but teaching has changed a lot throughout the years. There’s so much paperwork now in schools, whereas there used to be more of a teaching element. Sadly, kids don’t seem to have as much respect for adults and discipline has definitely changed. We don’t usually have a lot of problems with that here. Kids are usually at MDC because they want to be here.

Q: What do you hope the kids attending summer camp last year took away with them after that experience?  A: I hope they just really had a fun learning experience. Some of the activities we do with them in the classroom are science experiments where they get to see things happening. They don’t get to do a lot of that at school. It’s also really exciting for kids who are 4 and 5 to get to use microscopes. They will go outdoors and pick dandelions and little things in the grass and take them inside and look at them under the microscopes. A lot of the kids have never used a microscope before. They also learn about mangroves and learn the mangrove chant. Of 17 kids who were at our recent camp, eight of them had never been here before, so a lot of what we did was very new to them. And then we will have kids who have never been on a boat. One little kid recently said, “This was the best day of my whole life.” We also will get kids at camp on scholarship and they are experiencing things they have never been exposed to. It’s a lot of enrichment for them.

Q: What do you enjoy about working at the Welcome Desk and what are the challenges there? A: The main challenge is that things tend to change a lot and we have to keep up with it. When I worked with the blind, I taught computer skills, so it helps that I have that background to work on the computers at the Welcome Desk. The part I really enjoy is talking to all the people from out of town who are excited about being in the area. Sometimes they will ask how long I have lived here. I lived in New Smyrna back in the 1970s, so I’ve seen a lot of changes since I lived here more than 20 years ago. I know the area and can talk to guests about the area, what they can do here, and about our mission at MDC.

Q: Where else do you volunteer?  A: I volunteer once a week at Read-Pattillo Elementary School in a program called the Reading Stars. It’s for children who struggle with their reading. I work with two twin boys in kindergarten every Wednesday. I also volunteer in an after-school program there called Faith Quest that is actually offered through our church, First NSB. We go to the school and offer a program that’s sort of like Vacation Bible School. 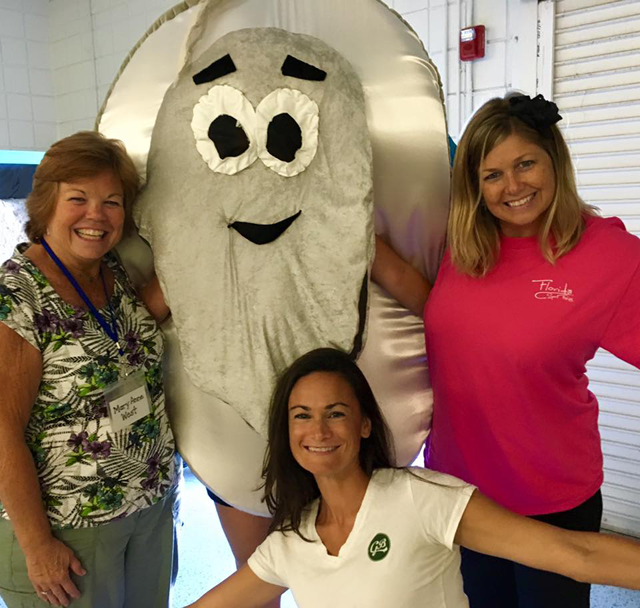 ​Q: What is your reaction to all the changes we have experienced at MDC?

A: I’m just excited about the future here and where MDC is going. Hopefully, the issue with the virus will pass and we will move forward quickly. I love the new kayak launch and MDC Kayak Shack, and the education programs and camps will continue to grow. Last summer, we had more than 400 kids in summer camp, so I’m hoping that what’s going on right now in the world won’t affect our numbers drastically this summer.

​Q: Why do you want to volunteer?  A: When I retired, after working from age 21 to 62, I knew I didn’t just want to sit around. I kayaked with a local group called the Happy Yakkers. A lot of the people I worked with at the blind center were really into kayaking, so a kayak group spun off their Happy Wanderers walking group.

Q: What excites you the most about helping MDC with its mission in our community?  A: We have such a national treasure right at our back door with the Indian River Lagoon. We have made people aware that we need to protect this body of water. For me, it’s fun watching the kids learn. One day, we took the kids up to Ponce Inlet and while they were walking on the jetty, they started noticing all the trash. We let them pick up trash and plastic and dispose of it in the trashcan before washing their hands. It’s great to see kids get excited about protecting the Indian River Lagoon. They get it.

Q: What has been the highlight for you at MDC?  A: Mostly just the contact with people at the Welcome Desk. And I also love working with the kids and being around them. I love that the center is here and I enjoy helping out however I can – whether it’s with education and camps, the Welcome Desk, assisting with the Florida Master Naturalist class setups or assisting with our “Farm To Table” dinners.  I’m not one to just sit around. That would not be retirement to me. 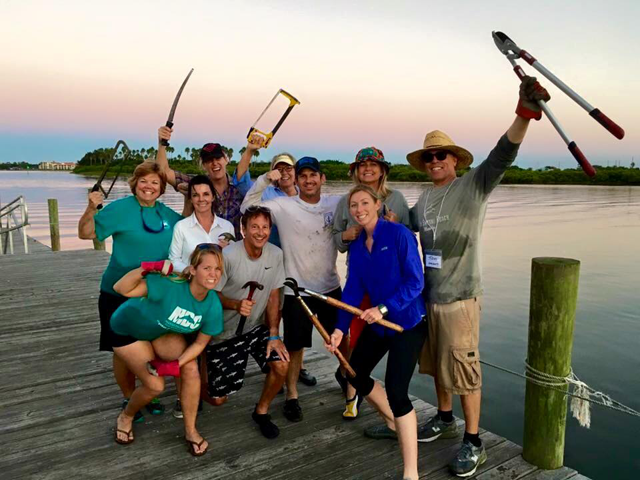