When you enter the Marine Discovery Center on a Wednesday morning, you will likely encounter volunteer Debbie Hinkle and her sister Sandy Cheney [who also volunteers] at the Welcome Desk.

Debbie has extensive volunteer experience in Texas and Florida, ranging from the rodeo rings and Habitat for Humanity in Texas, to Diamondback Terrapin discussions with young visitors at MDC and working with challenged teenagers in New Smyrna Beach. She shares her thoughts about volunteering in MDC’s September Volunteer Spotlight with staff writer Lisa Mickey. Read about her here:

Q: Where did you grow up?

A: I was born in upstate New York and my family moved here when I was 1½ years old because my daddy hated the cold. We lived in Orlando for nine years, but I grew up in New Smyrna Beach. It was great growing up here.

Q: Did you go to New Smyrna Beach High School – the one that used to be here on the site now occupied by MDC?

Q: How does it feel to be volunteering at a place where you used to go to school?

A: The first couple of times I came over here, I got goosebumps. Before I started volunteering at MDC, we had our 40th class reunion here and they let us tour through the building and grounds. We were sad they tore down most of the high school and glad to see that some part of it was left, but yes, it’s definitely bittersweet. I remember at lunch time, we would walk outdoors and go sit by the water to eat our lunches there. A lot of the students would go fishing or skip out and go surfing and come back with drenched hair. 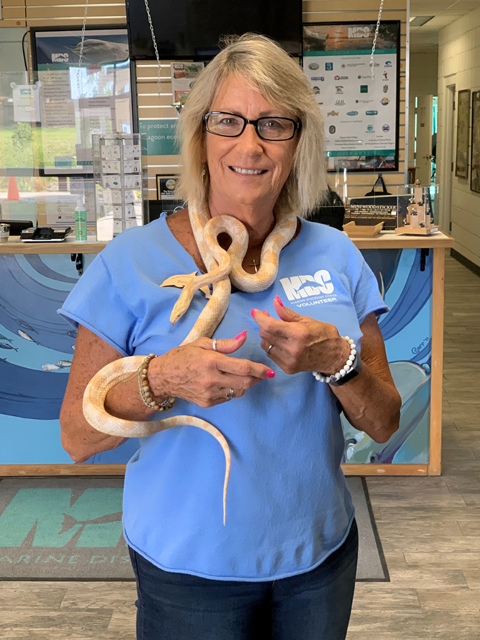 A: Yes, he worked at Cape Canaveral, so that’s why we moved here because it was closer to the Cape. He was a union iron worker and he helped build the VAB [Vehicle Assembly Building] at Kennedy Space Center. He also welded the leaves on the Swiss Family Robinson’s tree house at Disney World’s Magic Kingdom.

Q: What did you do after you graduated from high school?

A: I worked for about a year and a half at the marina on the North Causeway selling Johnson outboard motors. I also learned how to operate a forklift with a capacity of 22,000 pounds and lifted the boats 30 feet in the air. I would take them off the racks and drive them out and put them into the water. After that, I was able to get on with UPS and was heading for my first day of work when a woman drove across U.S. 1 and T-boned me, totaling my car. The impact spun my car around and my stick shift stopped my lower body while my upper body continued turning. I had internal injuries and it required seven months of recovery.

Q: What happened after your recovery from the auto accident?

A: After that, my sister, [fellow MDC volunteer] Sandy [Cheney], was ready to do something different. I was driving a Gran Torino at the time — like Starsky & Hutch — so in October 1976, we decided to head to California. We told everybody we would be gone for at least 30 days, but it was actually 41 years!

Q: Where did you go for all of that time?

A: We had friends in New Orleans, spent a couple of weeks there, and then we moved on to Houston. In 1976, the opportunities for work in Houston were endless! Something like a thousand people a week moved into that city. So, we gave ourselves two years to get in, get rich and to get out. I worked as a purchasing agent in the oil and gas industry. I was actually an Enron employee when they went belly-up in 2001. I was with pipelines and that division pulled out of the corporate [umbrella]. They formed a new pipeline company and everybody wanted us because we had Florida Gas, Northern Natural, Transwestern and a few other pipelines. Panhandle Energy bought us up, so I just changed hats and kept on doing what I was doing. It’s funny, but our engineers with Florida Gas were located in Maitland. All of our compressor stations were in places like Sarasota, Ocala and Maitland. The company would fly me over here a couple of times a year to get with our engineers and, of course, I would turn it into a weeklong vacation to see all my friends. A year after Sandy and I moved to Texas, my other sister came out a year later and our parents came out three years later.

Q: How long did you work as a purchasing agent?

Q: How did you end up back in New Smyrna Beach?

A: This is home and I came home to New Smyrna every year. Sandy retired from a chemical plant, went back to college, got her degree and taught school for 15 years. But we just decided it was time to come back home. We lived in Houston when it went from the nation’s seventh largest city to the fourth largest. I lived 23 miles from where I worked and it took me more than an hour to get there each day – and that was on a good day. The traffic there is just horrible, so I moved back here in 2017.

Q: You ended up staying a little longer than you planned!

A: It just worked out that way. I married a Texan and we were married for 26 years, but we got a divorce. He loved New Smyrna, but he would never leave Texas.

Q: While you were in Texas, what did you do with the Houston Livestock Show and Rodeo?

A: I volunteered there and helped rodeo fans get on and off the Metro buses from satellite parking locations all over Houston. A few times, I worked with the horses and in a couple of the rodeo clubs. I also volunteered with the Pasadena (Texas) Rodeo for six years.

Q: Did you volunteer in other places?

A: Yes, I worked with the Sunshine Kids. It was group for children with disabilities and Enron was very involved with this organization. We would take them to places like the zoo and to Houston’s Six Flags AstroWorld theme park to go on rides. I was also involved in fund raising for United Way, volunteered for Habitat for Humanity and with Helping Hands, which provided groceries and clothing for the less fortunate.

Q: Those places were all in Texas. Other than MDC, do you volunteer anywhere else in New Smyrna Beach?

A: I volunteer at Cudas UnHooked [a New Smyrna nonprofit that provides support to at-risk and homeless teenagers “dedicated to becoming educated, independent and contributing members of society.”] I also serve as a house parent, where I’ve volunteered for more than three months. The kids have to be in high school. The four-bedroom house was built and donated in 2014 by Habitat for Humanity, so there are three bedrooms for the kids and one for the house parent. We can take up to five kids at a time. We all get in the kitchen together to prepare the meals. All donations to Cudas UnHooked go toward clothing, feeding and housing these boys and girls. Their first year of college is also paid for. It’s a wonderful organization to help these kids.

Q: Do you have any hobbies?

A: I love to fish, but I don’t ever get to go. I also make jewelry, but I’ve gotten away from that because my eyes aren’t that good anymore. I have plenty of beads, though!

A: I knew they had a volunteer program over here and I learned more about it from MDC’s Laura Stapleton, whom I met through high school friends. I started working at the Welcome Desk with Laura in May 2019.

Q. What have you enjoyed about volunteering at MDC?

A: I love everyone coming into the center and I enjoy asking them where they are from and how they found out about New Smyrna Beach? I mean, what’s not to love? 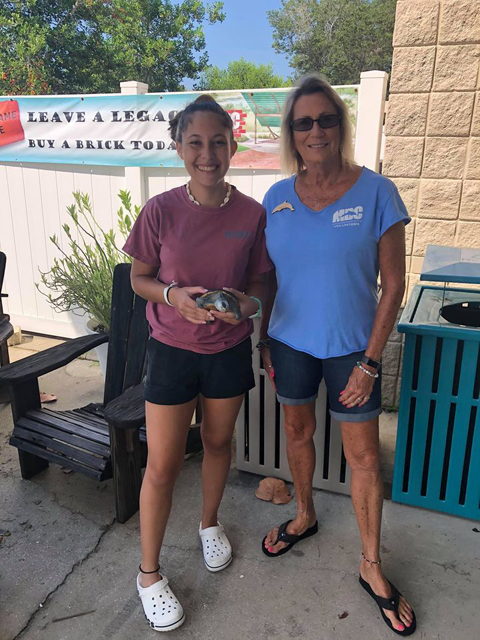 Q: How often do you volunteer here?

A: Right now, I volunteer on Wednesday mornings and I want to get involved with the grounds team. I helped Chad pull weeds one day and that stirred up my desire to do yardwork at MDC.

A: I’m blessed with my life and I want to give back. I really love telling people about New Smyrna Beach and the Marine Discovery Center. We have our own little paradise here and sometimes, as much as I don’t want to share it with everybody, I appreciate that people enjoy coming here and seeing it.

Q: What do you think you bring to MDC in your volunteer role?

A: Hopefully just a welcoming, smiling face behind the Welcome Desk. I hope I can make someone’s visit here a little bit more enjoyable.

Q: Talk about the changes you have seen at MDC in the time you’ve been coming here.

Q: What excites you the most about helping MDC with its mission statement of preserving and protecting the Indian River Lagoon?

A: Just the fact that everything MDC is doing for the environment is so important. If organizations like MDC didn’t step up, can you imagine what the waterways and shorelines would be like? It could be an absolute mess and there would be no future. I’ve also been active with the Coastal Conservation Cleanup in Florida, as well as in Texas.

Q: When you were a kid growing up here, did you have any understanding of how special the Indian River Lagoon is?

A: No, I wasn’t aware of anything about the Indian River Lagoon. We just called it “the river.” When you’re a kid growing up at the beach, your priorities are not about conservation or shoreline restoration. You take it for granted, but as you get older, you realize there’s a lot more to it. You have to take pride in every aspect of where you live, including taking care of the waterways.

Q: What has been the highlight for you at MDC?

A: Probably the most exciting day here was when we got a call about a stranded dolphin on a sandbar. The MDC staff got involved with it along with Hubbs-SeaWorld Research Institute. They were able to go get the dolphin calf off the island and I got to hear the whole story about how once they got the calf back into the water, all the other dolphins started congregating around it. It was like the adult dolphins were telling the kid, “Don’t ever do that again!” That was a thrill that day! I also get to walk Kitty [MDC’s diamondback terrapin] every Wednesday morning and I’ve held Eco [MDC’s resident corn snake] a couple of times. Of course, I enjoy walking around the center with our guests and talking to them about everything and taking the kids into the classroom to see the bamboo shark. The real jaw dropper is showing them the whale vertebrae compared to the human vertebrae. The expression on kids’ faces is just priceless.