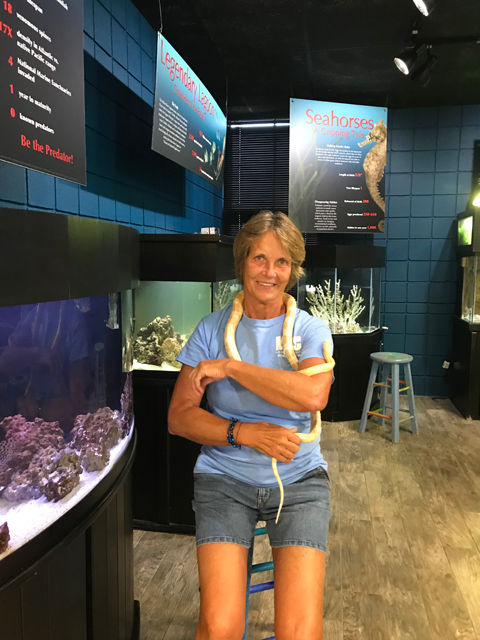 ​MDC volunteer Patti Hoffman admits she has a tendency to nurture.

And maybe that comes as second nature to the Pennsylvania native, who retired last year after working as a registered nurse since 1974. During her career, she specialized in maternal child nursing and served as an International Board-Certified Lactation consultant in American hospitals and around the world.

“I always loved maternal child nursing – mothers and babies and kids,” said Hoffman. “I’ve worked in labor and delivery and in neonatal intensive care units, but I liked the educational part of it more. The more I learned about natural breast-feeding, the more I wanted to teach it. I taught it all over the world, wherever we lived, even before there was a certification for it.”

​Hoffman’s late husband, Paul, served in the United States Foreign Service and his work took them overseas for 15 years. During that time, his wife worked as an embassy or consulate nurse, as well as with citizens in Brazil, Algeria and Greece.

The specialist in breast-feeding education taught childbirth classes, breast-feeding classes, conducted private consultations and visited patients in the hospital. She also taught CPR and sex education at an overseas American high school, and once worked as a nurse for an Algerian oil company.

While she was in Brazil for five years, she also learned Portuguese, which helped in her outreach to women there.

When the Hoffmans returned to the United States from Greece in 1998, she wanted to get into maternal child nursing again and took a course for certification.

“It was like taking the Florida Master Naturalist Program course because it was so eye-opening,” she said. “I had worked in nursing for many years, but there was a lot of new research available since I had left the U.S. Now, we were talking about such things as which drugs pass through breast milk and what might be the better drugs to take.”

Hoffman worked as a lactation consultant at a hospital in Virginia, but moved to Miami in 2004, when her husband was assigned to cover the Caribbean. She got a job in Miami working with mother postpartum depression, and also worked in labor and delivery and in neonatal intensive care, while conducting breast-feeding education with her patients.

Hoffman moved to New Smyrna Beach in 2010, but continued to travel to Miami once a month to work part-time at Mercy Hospital. She would work one weekend each month in Miami, teaching childbirth classes and CPR, while also conducting lactation rounds with patients.

In December 2017, Hoffman decided to retire and planned to divide her time between volunteering and sitting on the beach.

“I love the ocean and now I have more time to enjoy it,” said Hoffman, who has four adult sons and two granddaughters. “I always have a towel, my bathing suit, a chair, some sun screen and my boogie board in my car.”

Hoffman also spends considerable time volunteering as a docent at the Marine Discovery Center and working two days a week at the Atlantic Center for the Arts on Douglas Avenue.

In addition, she serves as president of the NSB Dance Club and organizes everything from ballroom dancing to line dancing at the Elks Club in Edgewater to other sites around town.

She learned about MDC through kayaking in 2011. After her paddle, she obtained information about becoming a volunteer and went through the MDC orientation program to become a docent with the center’s aquatic tanks. Once she retired late last year, her schedule opened to allow her to spend more time at MDC this year.

“I’m not an artist and I’m not a biologist, but when you think of a nursing career, there is a science-based knowledge that you need and there’s an art about the way you approach people,” Hoffman said. “In both nursing and at MDC, you deal with all kinds of people and my background has helped.”

Hoffman also started volunteering in MDC’s water-testing program this year. She and “a little team” test water in Edgewater each week – a new activity that has given her a lot of satisfaction.

“I want to nurture the lagoon like I nurtured people,” said Hoffman. “I really feel that and I think that’s why I’m drawn to this.”

Like many other volunteers at MDC, Hoffman is excited about the progress she has seen at the facility since she first arrived. She also appreciates MDC’s role in outreach when the community has questions about challenges affecting this area’s coastal ecosystems.

“I’ve realized the importance of trying to understand things, like the red tide,” said Hoffman. “How can you not let this stuff impact you?”

Throughout her nursing career, Hoffman was always focused on the specific needs of those in her care. Whether she was teaching her patients new skills, calming them, coaching them or getting them some time to rest, her goal was always to positively impact the lives of others.

“I want to feel like I made a difference in this life,” she said. “Maybe I helped some young mother with her baby. Maybe I helped them be a better parent or the father to be more understanding of the mother. Now, I feel the same way about the lagoon.”