The Marine Discovery Center’s Learning Lab was a busy place in January during a four-day microbial analysis workshop that hosted scientists from the University of Central Florida (UCF) in Orlando, as well as from the Indian River Lagoon Aquatic Preserve and the Smithsonian Marine Station, both of Fort Pierce, Fla. 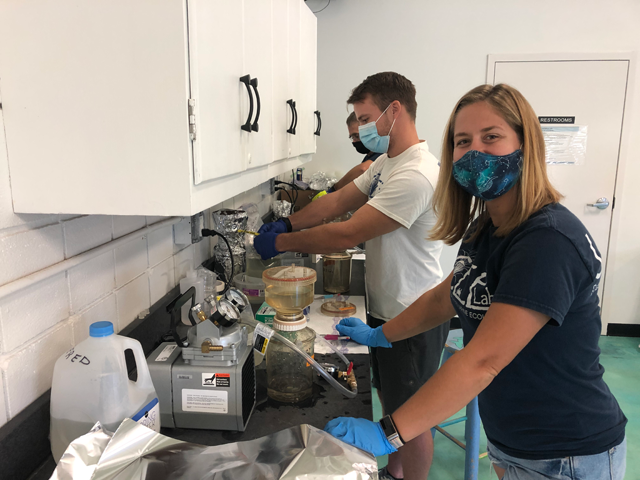 The MDC lab accommodated this quarterly endeavor in an effort to better understand the origin of microplastics and to determine if these plastics are transporting new and unexpected contaminants into the lagoon.

Specifically, the current research is focusing on concentrations of microplastics or synthetic particles within stormwater outfalls – urban infrastructure that allows drainage of fresh water after storms — and also on stormwater drains that flush directly into the Indian River Lagoon.

“Our previous grant with the Indian River Lagoon National Estuary Program to look at microplastics just looked at random places,” said Dr. Linda Walters of UCF. “Now, we are looking at the storm drains because there is a high probability that a lot of microplastics are coming in that way.”

In addition to analyzing water samples from the lagoon, Walters said the scientific team is also looking at oysters that filter the water and at any of the microbial communities living on the microplastics themselves. If there are toxins on the microplastics being consumed by oysters in the lagoon, Walters said the team hopes to learn more about that aspect of a changed food chain.

It was that concern by the Centers for Disease Control and Prevention (CDC) that actually sparked the study, Walters noted.

“I have been contacted by the CDC and some other groups that had read our published papers about oysters with microplastics in them and they wanted to know if, because of the plastics, we should stop consuming oysters?” she said. “I couldn’t provide them with that information because I don’t know.”

“And to also ask if oysters have toxins that came in with the plastics, the answer is, we just don’t know,” Walters added. “So, we procured funding to ask that question in this research.”

A team was assembled in September 2020 to tackle the one-year study, utilizing UCF faculty and students, Marine Discovery Center staff and volunteers, project partner IRLAP for sample collections, and Dr. Holly Sweat of the Smithsonian Institution for microbial analysis. MDC hosted the partners in its Learning Lab because many of their labs were temporarily closed due to Covid-19 restrictions.

​For the research project, the team samples water from different stormwater outfalls throughout the lagoon, which is divided into three regions: south, central and north. Volunteers in each region are responsible for 10 sampling sites. Eight of those sampling sites come from stormwater outfalls, while two are from control sites located at least one kilometer away from the stormwater sites.

“We have a really spread-out map area that allows us to see the bigger picture of what’s happening in the Indian River Lagoon,” said Tess Sailor-Tynes, a conservation science specialist and educator at MDC.

“Once the samples have been collected, they get filtered and analyzed for synthetic particles, which are collected off the filter papers to go through sequencing,” she added. “That helps us understand what kind of microbial communities are surrounding those microplastics and what implications that might have on the greater habitat.”

In addition to the water sampling, oysters are collected from all sections of the lagoon. The collected oysters are then cleaned, weighed, measured and placed into glass bowls for 12 hours to collect their waste. The waste is then analyzed for microplastics.

Oysters have a distribution of feces and pseudo feces, both of which are separated, analyzed and viewed microscopically. Hard, digested waste is feces, while the pseudo feces is expelled from the oyster’s body, rather than digested.

The process of collecting data is slow and tedious. The oyster waste is frozen and retained for analysis at Smithsonian Marine Lab.

“We’re looking at microplastics on oyster reefs in the water column and at those that are actually getting ingested by the oysters,” said Sweat. “We want to see how those microplastics are getting into the food web.” 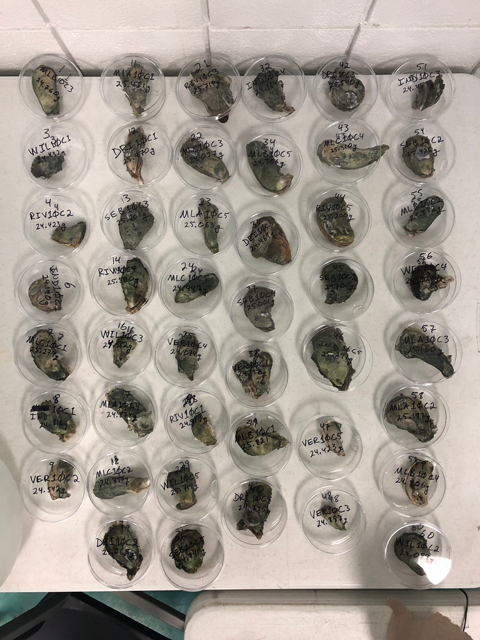 ​Using her area of expertise, Sweat is looking at the microbiome associated with the different plastics found in their research.

“Any time you put an object into the ocean, it gets fouled or encrusted with bacteria, algae and all sorts of different microbes,” she added. “Microplastics can be a very important delivery mechanism for different types of microbes into the food web whenever the oysters filter the microplastics out of the water column.”

Most of the microbes are harmless, said Sweat, but some may be “problematic and can cause illness.”

“The bottom line is, we want to get a handle on what’s growing on these microplastics,” she said. “The other thing we’re trying to show people about microplastics with this project is where it’s coming from and what we can do to reduce the plastic load.” 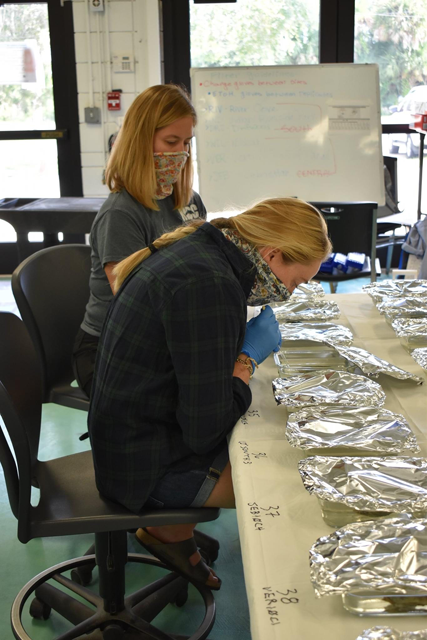 Sweat expressed enthusiasm about the collaboration in the research. Describing Walters as the “oyster guru of the IRL,” Sweat said she hopes her microbial perspective will also help answer questions from a plastic challenge that is becoming more widespread.

“That’s what’s so good about collaborations,” she said. “You learn from the people on the project with you.”

MDC’s volunteers also benefit from being associated with the project. They collect water samples monthly from 10 sites in the northern region of the lagoon. Some 20 volunteers assist with MDC’s microplastics program, ranging from high school and college students to retirees.

And while the research has specific objectives, as data is collected, Sailor-Tynes noted that an abundance of environmental data is revealed (such as presence of algal blooms) along with disconcerting findings in an area that has not yet received a tremendous amount of study.

“There’s just not a lot of research regarding human health implications,” she said. “But there’s talk about the amount of microplastics we consume and it’s unbelievable. In tap water, for example, there’s no filter small enough or that anyone can afford that can capture all of the microplastics.”

Even seasoned scientists dealing with hard facts and data can benefit from the perspective of research when it comes to everyday personal choices, added Sweat.

“This project has opened up my eyes on the use of plastics and has made me want to move away from single-use plastics,” she said. “I think a lot of people feel overwhelmed about microplastics, but maybe the message needs to be to just do what you can. If everybody does that, it’s going to make a huge difference.”