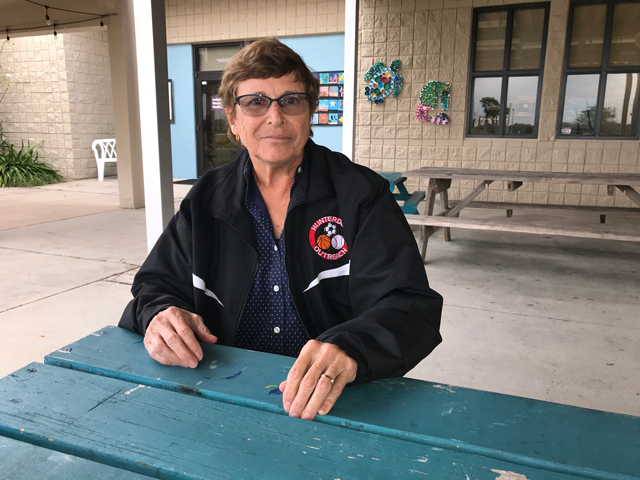 Greta Kenney has taught, coached and help mold countless young lives for decades. Now, as a volunteer member of the Marine Discovery Center’s board of directors, she is committed to adding her can-do spirit to the center’s future plans and dreams.

Q: Where did you grow up? A: I was born in Philadelphia and lived there until I went to college. Then I got married, did a little traveling and got a master’s degree.

Q: What did you do in your career?  A: I taught health and physical education from kindergarten through 12th grade. And then I taught at Metuchen High School in New Jersey for three years, got married, had a baby, and ended up moving to Texas.

Q: What prompted the move to Texas? A: My husband Stephen worked for Ethicon, part of Johnson & Johnson, and he was transferred there for four years.

Q: Where did you meet? A: I actually met him at a carnival in Philadelphia that was run by the American Legion. His father was with the American Legion, so he volunteered to run the wheel in a game where you could bet on certain numbers. We started talking and hit it off. The festival lasted a week and I went a couple of times. I was at West Chester then and he was at Moravian College. We ended up dating for five years and got married in 1971. We had three kids and now we have two grandchildren.

Q: How much has sports been a part of your life? A: I played fast-pitch softball and volleyball in high school. I love working with youth and I’ve been involved with kids of all levels for nearly 40 years, working with teams and camps. I coached college field hockey at Kean University, but mostly I coached high school hockey — with some basketball and softball coaching — for about 35 years. I also coached the Garden State League, which is New Jersey’s elite state-level field hockey program. I coached the Northeast group and we won many gold medals in two age divisions – high school juniors and seniors, and a younger group under them. And I was also a field hockey referee for a while.

Q: Didn’t your daughter play collegiate field hockey? A: Actually, both of my daughters did. One of them, Robyn Kenney, was an All-American at Boston University and went on to play 37 international matches for Team USA Field Hockey. My youngest daughter, Heather Kenney, played for the University of Maryland and is now training with the U.S. Women’s Masters squad. [Son Justin also played club-level field hockey and earned a spot on the men’s Under-20 national team at the U.S. Olympic Training Center, although competitive opportunities for men in field hockey is limited in this country.]

Q: How did being an athlete and a coach help you professionally? A: It makes you a good listener. You have to be able to hear what people are talking about, look at it from a broad scope and see how it’s going to grow into something bigger.

Q: Would you say that you learned team play through sports? A: I think playing on a team and being part of a team is a very important lesson. It’s different than an individual sport where you’re on your own, doing your own thing and it’s just you and the equipment. When you are on a team, there may be 10 or 11 of you on the field and if one person messes up in the wrong way, sometimes the whole thing falls apart. You have to learn to take the good with the bad times. I had one hockey team in Metuchen [N.J.] that finished second in the county championship, but I can’t say that I had a lot of winning seasons. You have to learn how to lose graciously. Even when you lose, you can help children learn they are still good, they played well, but they just got beat by someone who was better that day. We all have our moments. You grow as a person in sports and it was very rewarding to work with children, high school kids and college athletes. You can apply the things you learned anywhere you go.

Q: How did you get involved at MDC? A: I decided that after I retired, I would need something to do. I missed being around different people. I went to the local recreation department here in New Smyrna, but got nowhere with that. I applied to volunteer at MDC in 2011, but I didn’t hear anything and kind of forgot about it. Later, I met a friend and we started playing tennis. They were involved at the Atlantic Center for the Arts and invited me to a meeting over there. I ended up on their volunteer board. After that, I got involved with MDC’s fund-raising committee, which led to being on the board of directors.

Q: What kind of volunteer work have you done at MDC? A: I started out by helping with MDC’s tent at the street festivals. I did that for a couple of years and I learned a lot of new things at those events.

Q: On the fund-raising committee, do you have a comfort with asking people to donate money? A: It depends on what I’m asking them for. I don’t mind being out in a crowd and asking people to come visit us or to give us a few bucks. Some days it works and some days it doesn’t.

Q: Do you still volunteer at ACA? A: Yes. I work with ACA’s volunteer league. It’s a group of volunteers who help raise money for their art camps and kids’ programs. I like what they are doing and it’s a good group of people.

Q: What are your hobbies?
A: I guess my hobby is volunteering, but I play tennis. Playing tennis when I moved down here made a big difference. I had not played in about 20 years, but then I started playing a couple of days a week in a league. I still play tennis with some women over at Bouchelle Island twice a week. I also enjoy traveling with my husband. 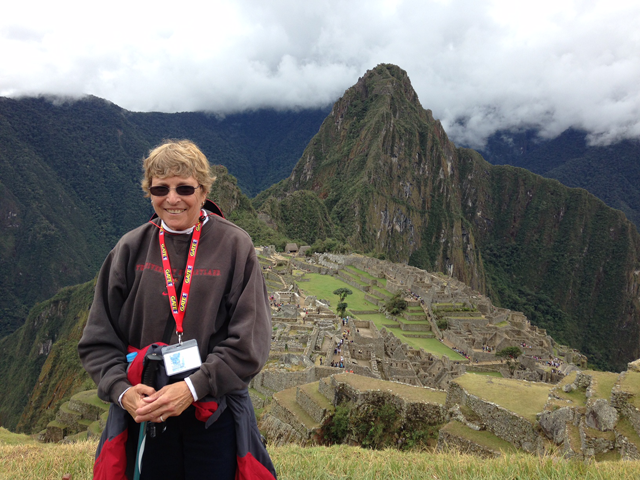 Q: What is the best part of being involved with MDC’s mission in the community? A: I’m an environmentalist and I believe in conservation. My older daughter just put solar panels on her house and she’s always pushed our family to take care of the environment. Plus, I love the outdoors. I think it’s important for people to understand what we have and to not abuse it. To be associated with this organization, I feel like I’m helping get that message out there.

Q: Has there been a highlight for you as an MDC volunteer? A: To be a part of the philosophy and mission of MDC has been so rewarding. We have had some wonderful board meetings and we’ve been able to produce so many wonderful things at the center. The growth has been great to watch.

Q: What is your perspective of MDC’s growth?  A: When I started six years ago, none of the things that are now on the grounds at MDC was here. I’ve watched it develop, so now to see where it’s going in the future is exciting. I’m glad to be a part of it.

Q: Where do you see MDC’s place in this community? A: Educationally, I think we play a very big part in conservation. The way the mission is set up — with the hands-on, feet-wet concept — is so important to teach both children and adults what is going on and what is needed to preserve our environment. That is something I see happening now, and I love it because it’s so important.

Q: What about raising MDC’s visibility in our community? A: Absolutely, that is the next step. We need to make sure people know we are here. It’s very frustrating that so many people here still don’t know about MDC.

Q: Why do you want to spend time volunteering? A: I need to feel like I’m contributing something somewhere. I have the background to work with people, having taught and coached for so many years. I’ve been blessed with a very fine career in recreation, three wonderful children and a great husband. I’m just trying to give back from all that I’ve received